Understanding the Food System in Vietnam

Getting food is one of our primary need and today, the world is producing more food than ever. However, a growing world population and rising income levels, combined with serious natural resource degradation and climate change, pose enormous challenges to our global food system.

We need to adopt more sustainable methods in order to provide access to safe, affordable and nutritious food for every person, without damaging the natural environment or wasting resources.

What is a Food System? 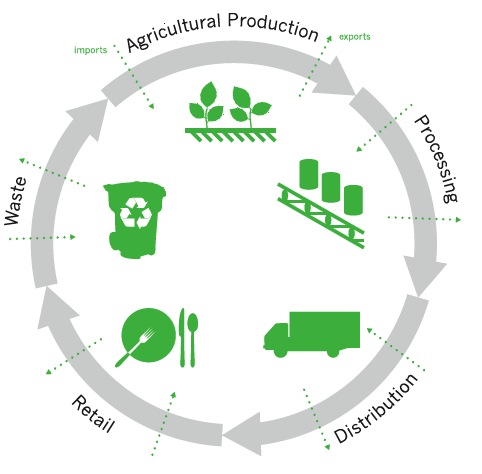 From the Grow. Eat. Compost. Repeat article by Spur.org: diagram by Carsten Rodin

A food system is a complex web of activities involving the production, processing, transport, and consumption of food. It includes sub-systems in topics like communication, education, and culture. The relationships between these sub-parts influence the efficiency and sustainability of the overall system. Since the sub-systems rely on each other, changes in one sub-system will affect all the others.

Issues concerning the food system include the governance and economics of food production, its sustainability, the degree to which we waste food, how food production affects the natural environment and the impact of food on individual and population health.

Making our food system sustainable means meeting our current needs without compromising the ability of future generations to meet their own needs.  Many changes need to be made at both consumer and corporate levels in order to achieve this.  It may seem like a daunting task since the food system is made up of so many elements, but there are many steps that can be taken to raise awareness and work to increase sustainability every day.

What are Vietnam’s Food System Characteristics?

Geographically:
Vietnam’s food system benefits from the diverse climate and geology, which allows a large variety of nutritious and fresh foods to be produced. Each region carries their distinctive and unique characteristics that reflect the living conditions of the people there.

In northern Vietnam, a colder climate limits the production and availability of spices. As a result, the foods there are often less spicy than those in other regions. Black pepper is used in place of chilies as the most popular ingredient to produce spicy flavors.

Central Vietnam is the region in which food is prepared with the strongest and boldest flavors. The abundance of spices produced on its mountainous terrain makes this region’s cuisine notable for its spicy food. Once the capital of the last dynasty of Vietnam, Hue’s culinary tradition features highly decorative and colorful food, reflecting the influence of ancient Vietnamese royal cuisine.

Economically:
Economic growth after 1986 brought significant changes to the traditional Vietnamese diet. Vietnam has significantly reduced food insecurity in rural areas. The increase of income has led to a diversification of food and the share of rice, which remains important, has reduced in the share of calories taken per day. It improved the incidence of low height and underweight and now higher amounts of starch, protein, and fat-rich foods are consumed.

But the nation is simultaneously experiencing undernutrition and obesity. Since 2011, 5% of children and 8% of women are overweight. Twice as many women are still underweight.

And food is not limited to the kitchen. Indeed, a belief says that good health comes from balancing hot and cold. Foods are considered to be either hot or cold. For example, skin problems are hot and should be treated with cold foods, like rice, fruits, vegetables, or fish. Digestive problems are cold and should be treated with hot foods like meat, spices, and sweets. Food also plays a major role in Vietnamese traditional medicine.

Added to this, while occidental countries count four different tastes, Vietnam counts five: sweet, salty, bitter, pungent and sour. Which highlight the importance given to food.

Nowadays, foods are still purchased at open air markets and street vendors are popular sources of food. This is one of the most serious concerns because it makes it difficult to ensure food safety practices and the cold chain.

Added to this, the increase in the urban population requires an increase in productivity, most often based on pesticides and chemicals. These products affect the quality of food and health of Vietnamese people. For example, Vietnamese inhabitants have high rates of gastrointestinal cancer, which could be from the process of polishing rice that uses asbestos.

Another concern is the vast amount of chemicals used during the war. It deteriorated the soil and has an impact on the quality of foods.

Then, Vietnam faces a challenge regarding the food security of urban populations. It has to ensure physical and economic access for all.

These last 15 years, public policies strongly supported rural areas in terms of food safety. In many regions, the government distributed lands to the people for them to grow their own food. But nowadays new types of food insecurity are appearing in urban areas because people no longer have the opportunity to produce their own vegetables.

And despite the growing economy, many Vietnamese people have precarious jobs in big cities. These inhabitants have a low purchasing power and the rise of food prices affects them directly. Some vulnerable households sometimes spend up to 75% of their budget on food!

New solutions adapted to the urban environment are to be put in place.

Solutions and Innovation in the Food and Beverage Sector

As Vietnam is developing quickly, it is crucial to preserve its gastronomic culture while reducing its environmental impact.

One solution is to educate both producers and consumers about safe farming and sustainable food. The first change both consumers and companies need to make is to eat and cook more seasonally instead of all year round. It offers many benefits, including diversifying diets by encouraging consumers to try new foods each season.

It also reduces the energy and resource costs of growing food, since it is easiest to produce in its natural season.  When it is grown out of season, farmers may need more water and fertilizers to achieve the high yields they desire, but that puts more stress on the earth and its resources.

Secondly, Vietnam should encourage the consumption of locally grown foods. This will reduce transportation costs and its resulting environmental impacts, since foods will not need to travel as far.

Many aspects still need to be in place with food transportation in the country. For example, many customers buy international products, such as meat or processed food, from other countries as they trust the international transport and food safety more than when food travels internally.

For an encouraging start, I have listed some companies at the end of the article that I have seen in the region that are promoting an alternative way of sourcing food.

This overview gives you an idea of the opportunities Vietnam must seize. As food occupies a major part in our daily life, it is a strategic issue in which actions have a strong and powerful impact.

We have to develop a wide range of creative sustainable solutions to take up the challenges we are facing! 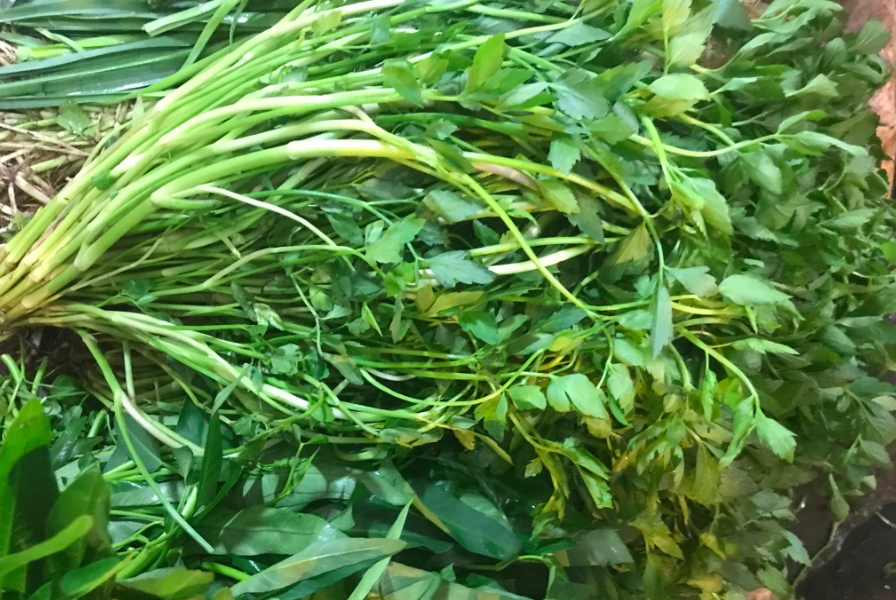 Here are some examples of simple practices you can implement on a day-to-day basis:

An Encouraging Start: Some Examples from the Region

Some organic farming practices are developing in Da Lat at the Organik Farm. It benefits from several organic certifications (United States, Japan, Europe) as well as GAP (Good Agriculture Practices), VietGap and Global Gap certifications that limit the use of pesticides but are less restrictive than the organic one. More than 25 different vegetables are produced to maintain biodiversity and the ecosystem. The products are marketed in Ho Chi Minh City in their organic shop.

In the region of Hanoi, the brand Big Green also sells organic products and works in collaboration with cooperatives and organic farms. Big Green has a social and environmental impact noticeable in Vietnam.

Then, there needs to be more emphasis on eating foods with lower environmental footprints. Livestock produce large amounts of greenhouse gasses, consume high quantities of water and grain and are the largest users of land in the world.  Because of this, it is important for consumers to be more aware of the impact their food has on the earth.

Plant foods like beans and grains have a much lower environmental footprint and many nutritional benefits.

Vegetarian and vegan food offer is growing in some neighborhoods of Ho Chi Minh City. It is also quite common to cook meat substitute or plant-based ‘meat’ such as tofu, wheat or jackfruit.

Unfortunately, these alternatives are often wrapped in plastic or shipped across continents, which increase the gap of their environmental footprint. You should pay attention to the origin and packaging of these products if you buy them regarding environmental concerns.

In Vietnam, this vegetarian consumption is still small: nowadays the middle classes want to eat more meat, sign of higher social class. To encourage a change and promote sustainability many foodtech companies are revolutionizing the food system in Asia. Using biotech and cell-based solutions to create ‘clean’ meat, they make plant-based formulas for vegan-friendly meat and protein-based food made of bugs. These startups are driving serious change. 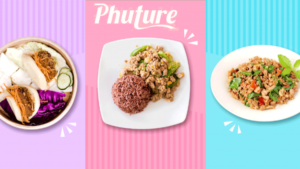 One of them, Phuture Foods, has created a vegan mince pork substitute made out of wheat, mung beans and shiitake mushrooms. The pork alternative is also halal-friendly to cater to the significant Muslim population in Asia, as well as Buddhist-friendly as it contains no garlic and onion. Their plant-based pork mince is fortified with all 9 essential amino acids, vitamin B12 and iron, and is free from cholesterol and antibiotics.

Based in Hong Kong and Malaysia, the company is eyeing the Asian market especially given the recent epidemic of African swine fever, which is causing a pork shortage as millions of diseased pigs across the region are culled.

In Ho Chi Minh City, FoodBank Vietnam reduces the amount of food waste and tackles the inequalities. In 2016, a survey by Electrolux of 4,000 households across eight countries found that Vietnam ranked second in the food waste index in the Asia-Pacific region, following China. The aim of this non-profit organization is to collect expired food that is still usable from food stores and a wholesale market.

It is also soliciting donations of food from companies and organizations to give to the needy. In addition, it provides free food to 10 social welfare centers and shelters in Ho Chi Minh City, with more than 5,000 meals provided each month.

Putting the Power of Youth Behind Sustainability & Innovation

A New Solution to Scale up Recycling: The...

[…] Click to read in her own words Understanding the Food System in Vietnam. […]

Thank you for your encouraging comments!

Thankyou for helping out, wonderful info .

Hello friends, good article and good arguments commented here, I
am genuinely enjoying by these.